Building a Boardgame in Azure

Some time ago when I started developing software as a profession, it was quite obvious to go for your favorite programming language, and some sort of SQL-ish database to store your stuff in. Way back in my Linux time, that was Perl and MySQL or PHP and MySQL. Later that became VB and SQL Server and eventually C# and SQL Server. Now, with the cloud all around us, we carefully look at the type and kind of storage we need and pick the best possible solution for that. Is your data structured? Volatile? Does it require replication or multiple global write capabilities? Everything is possible! For this game, I went back to my good old friend called SQL Server. I’m running the database in Azure, so that means I need to provision a database server and a database in Azure.

In the beginning, Azure SQL was kind of a sub-set of the real thing. You couldn’t run just any command you could run on your local SQL Server. Nowadays, Azure SQL is ahead of SQL Server in many components. It’s easy to provision and the built-in advisor is spot on helping you out with performance issues. The editions go from a cheap server allowing you to develop and test stuff for almost nothing, to full-blown SQL Server setups with huge power and capacity spending tens of thousands of your dollars a month.

Now the struggles I always had with SQL Server is that you’re bound to a specific data schema. At the time we delivered Windows client software, it was fairly easy to run migration scripts when installing a new version of your software system. But what to do when something goes wrong? Nowadays we have our CI/CD pipeline, which should take care of our database migration, but how?

In my previous post about Pipelines, I explain how I use an Azure DevOps multi-stage pipeline, to compile and deploy my system. This would be the ideal time for me to also update the database schema and/or to execute a seed of the database.

A seed is often done when you require your database to have certain data in place prior to running the system. 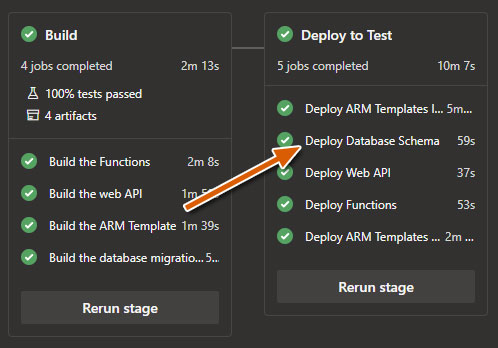 First I need an argument to specify the action I want to perform (e.g. Schema migration or database seed). And then I need four more arguments. For a SQL Server connection, the console app requires 4 arguments:

Since I use a deploy-time key-vault to store secrets (like SQL Server password and stuff), all the information I need is available from within the pipeline so I’m good.

The Microsoft.Extensions.CommandLineUtils is a really nice NuGet package to write a CLI, it allows you to easily interpret command line arguments. I used this package for this project.

Now in the OnExecute, I validate if all arguments are there, of not show a hint, else execute the migration.

To perform a database migration, you can use several different strategies. The most obvious when using C# and a SQL Server database is Entity Framework Migrations. There are however more options. When your business for example requires a DBA to maintain the database, or when you prefer to use a different ORM like LLBLGen, you may need a different approach and then the DbUp NuGet package may help you out. It allows you to execute SQL Scripts. The default setup will scan for SQL Scripts attached as an embedded resource in one of your code libraries and executes each and every SQL Script it didn’t execute earlier.

As a matter of fact, I used DbUp in this game. The following code performs a database migration using DbUp:

Now I need to adjust the pipeline. The first step is, that my console app needs to be compiled and published as a pipeline artifact, just like my ‘core’ system.

So now the migration system is ready to go. Then I need to adjust the release stage to add a job, migrating the database schema.

In the past, I used to do the database migration from within the ‘core system’. So for example when deploying an ASP.NET Website, run the migration from within the startup. A huge disadvantage because migrations and seeds may take a while and ASP.NET startup procedures are already a little bit slow. The other option is to use command-line arguments and call you ASP.NET app with that arguments to update the database, but once again, it pollutes the code base in my opinion.

Finally, by configuring your database migration as a job within a multi-stage pipeline, you allow the pipeline to execute the migration in parallel with other systems which is a big advantage because you can dramatically save time there. As you can see in the image above, I execute an ARM Template Incremental job, wait for that, and then execute three jobs in parallel (Update the database, Install the API App, Install Azure Functions App).

Go ahead and give it a spin!